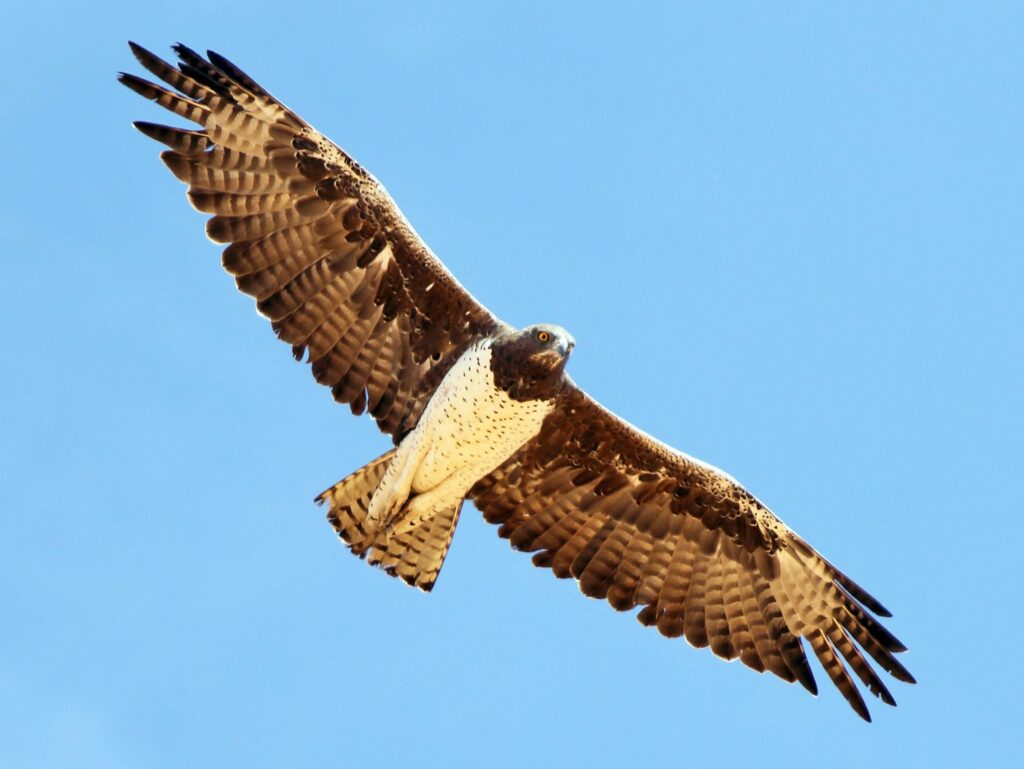 Martial eagles are undoubtedly uncommon in South Africa outside game reserves, and the discovery of a breeding pair on the self-drive route of the Dinokeng Game Reserve (DGR) has caused considerable excitement.

As a result of the discovery, the planned Boekenhoutskloof picnic site will be relocated.

The birds were first recorded in 2012 by Tienie Graf, of the nearby iKhaya LamaDube Game Lodge. She has photographed these majestic raptors since 2011, although she did not initially identify the “blackish eagle” of which she had images.

In 2013 she posted pictures of a juvenile bird which has more white on the body than the adults. In 2014 she was able to watch the chicks from an early stage. Like most eagles, martial eagles breed in winter, with laying dates peaking in May.

In 2015 word of these eagles got out, which coincided with the opening of the DGR self-drive route. The planned picnic site for the DGR self-drive route was immediately in front of the martial eagle nest, and the concern was soon raised that the visitors may disturb the birds and reduce their chance of breeding, which they had evidently done successfully for the three previous years.

A panel of specialists came to inspect the site, and immediately expressed both excitement and concern.

“There are less than 400 breeding pairs of martial eagles in South Africa. Populations have decreased throughout the country, especially outside of protected areas,” explains Nico Grobler, Gauteng deputy director for the reserve.

“For this reason they are currently considered vulnerable, which is less serious than threatened or endangered, but still a matter for some concern. Because of their rarity value, they are included among the Kruger National Park Big 6 bird species. But this pair is less than 50km from Pretoria.”

At the time of their discovery, Dr Craig Whittington-Jones, Gauteng regional ornithologist for the provincial government, said that the Dinokeng Game Reserve pair was the only active breeding pair of martial eagles in Gauteng that his department was aware of.

So, although the Boekenhoutskloof picnic site will no longer be directly under the martial eagles’ nest, there is still a good chance of seeing the birds on the DGR self-drive route.

One of Gauteng’s leading birders and photographers, Richard Montinaro, was delighted to hear about these birds and rushed off to see them as soon as word got out.

“Upon arriving at the reserve I caught sight of the large trees where the eagle was last seen, and sitting next to the large nest was the martial eagle – I was over the moon with the ease of finding this stunning bird, and proceeded to get some amazing photos of it in a relaxed state,” says Montinaro.

“I will no doubt be returning to see these eagles in the coming months, as they are so accessible and reside in a beautiful nature reserve with abundant birdlife and wildlife.”

Other birds that are exceptionally rare in Gauteng and that have occurred in the reserve include saddle-billed stork, African openbill and blue cranes. Two pairs of blue cranes are currently still resident in the reserve, so Gauteng birders have a good chance of recording two very special species – and perhaps finding a few more.

Look out for the martial eagles while on the Dinokeng Game Reserve self-drive route. Kindly note that a 4×4 or at least a high-clearance vehicle is strongly recommended to reach the location of the martial eagle nest.