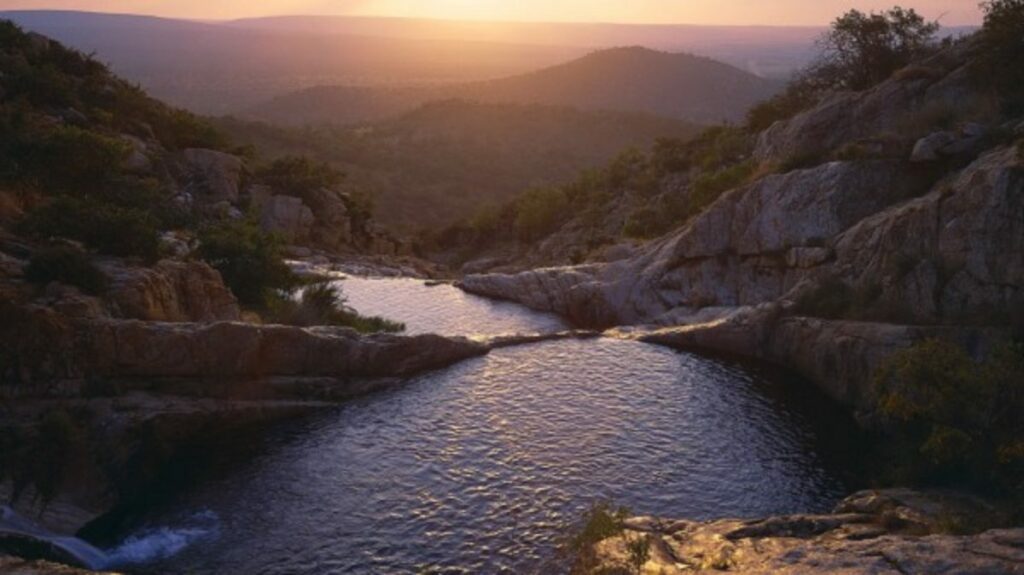 The Magaliesberg, a World Biosphere Reserve, is an ancient mountain range that lies on the north-west border between Gauteng and North West provinces. Stretching 120km north of Johannesburg, the range was formed about two billion years ago, and is home to some of the oldest mountains on Earth, at 2 300-million years old, 100 times older than Mount Everest.

The Magaliesberg is not only in rich in geology, but also has a wealth of history. Warring local peoples fought for territory, and during the South African War (the second Anglo-Boer War) at the turn of the 19th century Boer battled Brit for control of two important routes that lay in the mountains between Pretoria and Rustenburg. The battles of Nooitgedacht, Olifantsnek and Buffelspoort were fought here and you can still see ruins of some of the old English blockhouses atop some of the high ridges.

The area is particularly beautiful. Discover steep quartzite cliffs, deep gorges, tumbling waterfalls, indigenous woodland, grasslands and bushveld savannah. It’s a nature-lover’s paradise with over 130 species of trees and a great diversity of ferns, grasses, flowers and fungi. If hiking is your thing then head to the Magaliesberg for  a gentle stroll or strenuous hike, depending on your taste or fitness level.

Huge herds of game once inhabited these mountains, but although they are long gone, because of hunting or lost habitat, there are plenty of small animals still roaming the area, including vervet monkeys, baboons, porcupines, bushbabies and klipspringer. Now and then an elusive leopard shows his spots. There’s also an abundance of birds, so prepare to tick off over 300 species, including the Cape vulture and Verreaux’s (black) eagle that nest in cliffside colonies.

The Magaliesberg is an outdoor adventure magnet for locals and visitors alike. You can bike, hike, go birding or fishing, climbing or abseiling, quad biking or horse riding, white-water rafting or ballooning. You can rev your adrenalin up even further by swinging through the forest on a canopy tour over the rock faces of the spectacular Ysterhout Kloof.

The area abounds not only in natural beauty, adventure activities and wildlife, but also in things to see and do.

If you’re interested in the origins of humankind (and who isn’t?) a visit to the ancient Sterkfontein Caves, where some of the world’s oldest hominin fossils have been found, and the adjacent award-winning visitor centre of Maropeng are must-sees. You can also go game-spotting at the Rhino and Lion Nature Reserve.

Go shopping on the Magalies Meander that wends its way through the countryside and browse through art galleries, potteries, craft and curio shops, quirky boutiques and farm stalls before grabbing a bite at a quaint café, attractive lodge or country restaurant.

If you want to stay overnight or longer then choose one of the self-catering lodges or campsites, a friendly B&B, a cottage, guest house or five-star country hotel. Or to reconnect with nature, abandon stress and refresh the soul, spend a night or two at the privately owned Mountain Sanctuary Park, a haven of natural peace and tranquility.